What Do Mormon's Believe - Men and the Mormon Church 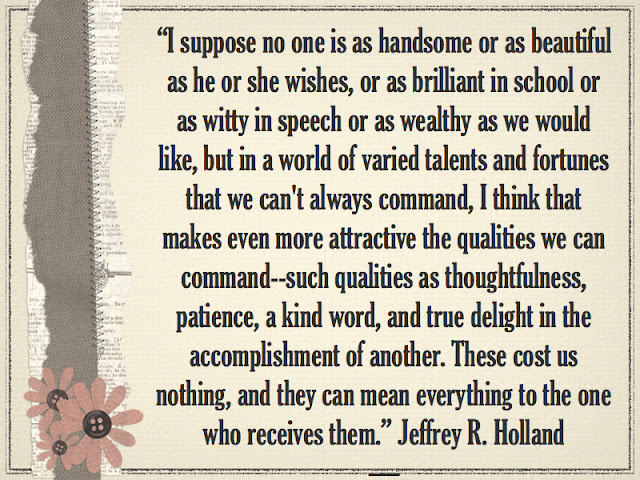 Hello! Welcome to my blog. My name is Sue. In an effort to shed some light on what the Church I belong to believes, I am doing a post every Sunday with the topic - What do Mormon's believe? Today I want to do some mythbusting so to speak about men in the Mormon church in which some people view them as dominating over the women. As a woman that has gone to The Church of Jesus Christ of Latter-day Saints for fourteen years, I can report that I am not dominated. It is true that men "preside" over this Church, but that "presiding" is not meant for power or control, rather they are to be of service to the membership - kind of like what the Savior said in Matthew 20:28

...the Son of man came not to be ministered unto, but to minister..."

That is to say, that He was not here to be served, but rather, to serve.
I have never felt so empowered as a woman since joining this church. I joined when I was 28. Society seemed to teach me that the power of a woman is to leave a mark with the power of seduction, flaunting what I have because I have it. There are better ways to leave an impression. Society also seemed to teach me that staying at home with children was some form of oppression for a woman. I find staying at home with children (if you can afford it) honorable and important. Although there seems to be a battle of the sexes in society and with some individuals, the Church actually elevates women. It is expected that both men and women treat each other with respect.


There is an immense amount of talent, and I may say of real sound statesmanship within a community of ladies; and if they would only train their minds, and exercise the rights and privileges that are legitimately theirs, and would contemplate subjects that they now pass over and never think about, they would find they have an immense amount of influence in guiding, directing, and controlling human affairs.
--President Brigham Young

This was a quote from a male leader empowering women for good ahead of the times. I am not exactly sure when this was said, but Brigham Young was the leader of the church from 1847-1877. Another quote is below from a more recent leader (1994-2008)...

People wonder what we do for our women. I'll tell you what we do. We get out of their way, and look with wonder at what they are accomplishing.
President Gordon B. Hinckley

Both quotes are an example of the respect that the men in our church are expected to give all women.

When I met my husband, he was different than other guys I dated. He respected me. He was kind and had values that made an impression on me. He was a Mormon. Time went on and I learned what Mormon's believed in and taught first hand - and I joined the Church as well. The quote art above is one of many principles taught at my church, and we both try to apply those qualities to our lives to become better people. My husband and I have been married for twenty years. My hubby is not perfect, but what I can count on is that he will eventually do right by me because of what he is taught at our Church. I think he would say likewise in regards to me. Here are some pictures of my sweetie and I.

I came across an article on BeliefNet (I have no idea what faith sponsors that site )titled, The Mormon Gender Gap.
Here is a snippet of that article:

According to [the] Pew [Forum], Mormons have one of the most lopsided gender ratios of any religion: 44 percent men and 56 percent women. You can’t argue with the gender gap — that’s what the data is. The question is why such a disproportional gender gap emerges in the LDS Church...
What is it (that women) like so much about LDS church activity?..... (The author tries to make some explanations -some I disagree with- you can read my comment linked to that article)
At the very least, it should be a wake-up call to those LDS feminists who depict LDS women as some sort of oppressed underclass in a patriarchal institution. The data tells the opposite story: the women are quite happy while the men are voting with their feet. What LDS feminists need to explain is why women are so happy with the LDS Church.
Read the whole article here: http://blog.beliefnet.com/mormoninquiry/2009/05/the-puzzling-mormon-gender-gap.html#ixzz26ltuM17F

So yes, in my congregation in British Columbia Canada, there are more women than men. They would not be there if the men were pompous or ignorant towards them.  I am always surprised to hear that apparently I am oppressed as a woman because I belong to this Church.
If you are searching for some truth about the Mormon Church I hope you take into consideration what you have read on my blog.  Of course, we all need to come to our own conclusions. Our Church welcomes people to investigate these issues to make educated decisions for themselves. If you are interested in learning more please go to LDS.org or Mormon.org or you can go to my profile on Mormon.org by
clicking here.

Thanks for stopping by!
Posted by Sue@creativetryals.blogspot.com at 5:08 PM