Utah Road Trip - What I Learned, What I Would Change 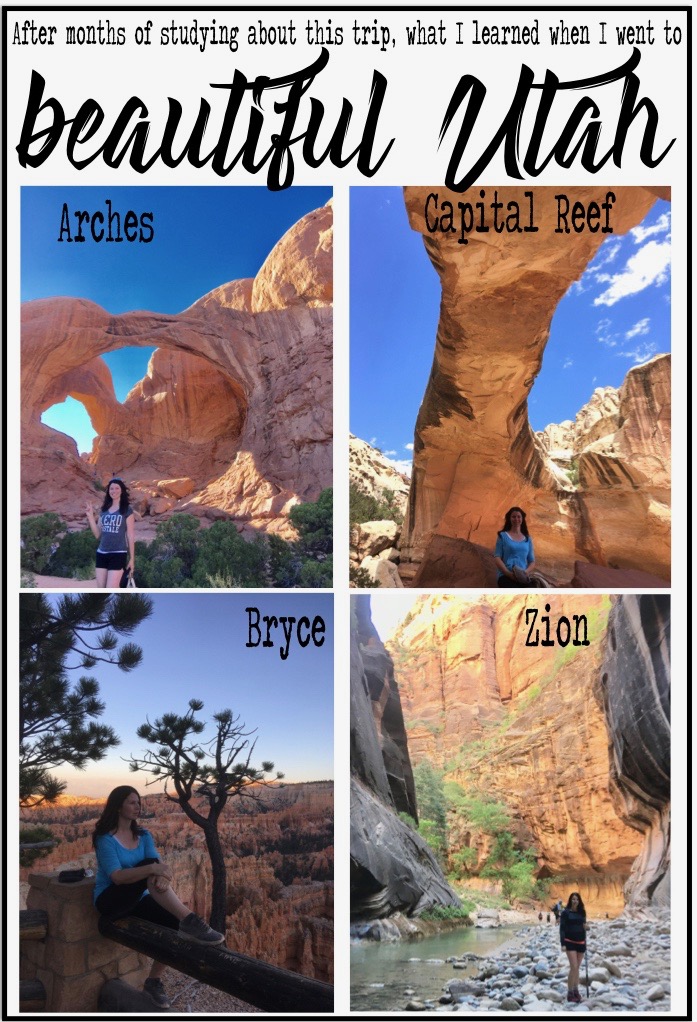 I just got back from the most amazing holiday in my life. I have not traveled much in the world, but I am starting to explore the continent I live on. I have been to Oregon and loved the three highway 101 trips we have done.  We have gone to Avenue of the Giants in California. We have been to Olympic National Park. Of course these were wonderful amazing trips filled with beauty and the awe of nature. I have to say, I was blown away by our trip to Utah. I live in beautiful British Columbia Canada. We had a week to do our trip. I would have loved to have been able to spend more time but the cost of the trip was pricey with having to pay 1.36 exchange - OUCH! The studying about the area and the planning began months and months in advance. It was hard to choose where to go, I wanted to see it all, but I knew that time was limited. I searched Pinterest, Trip Advisor, and many blogs and websites. I am so grateful for all the information people have shared. If I didn’t do my homework this trip would not have been as good.
Here is what I learned when I went to Utah along with some things I would change: 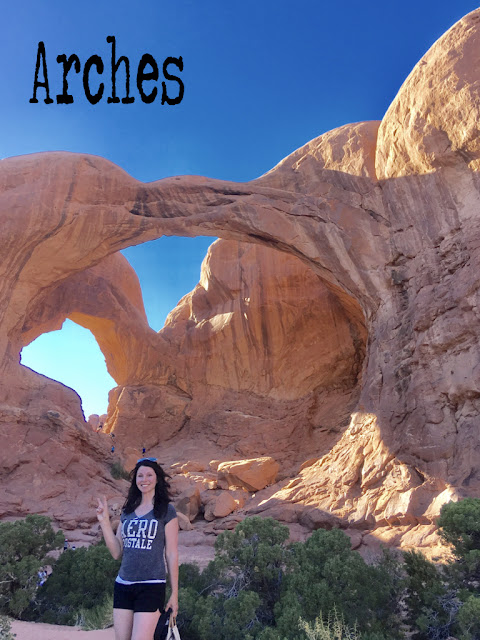 Moab: (July 1)We drove from Salt Lake to Moab via highway 6W. This took about 4 1/2 hours. Most of the way was flat and desolate. We did not find this very scenic, but it was the fastest route.

We took a little detour to Dead Horse State Park. The drive on highway 313 was very scenic. This is the highway that takes you to Island in the Sky Viewpoint. We only went as far as the State Park. I will do a post on that in the future. We only had one night in Moab. I wish I had time to do at least two nights. We stayed at the Fairfield Inn and Suites. It was awesome but pricey. It was our favorite hotel of the trip, but then again it should be as we paid the most for it. We relaxed at the pool for a while. The pool area was the nicest I have seen at a hotel. It was July 1 and scorching hot. Around 6:00 we drove to Arches (very handy - 3 minutes away). We drove right in - no line up. The drive at the beginning was fantastic! The big cliffs, driving up the mountain road was incredible. We drove to a lot of the sites that were easy to get to. Doing hikes in that kind of heat was not my favorite so we opted for the easy short ones - the double arch/windows, and balancing rock. A lot of formations are easy to see from the road - however the one I wanted to see was Delicate Arch which I researched was a 2 hour hike to get to. We planned on doing this hike in the morning - but we did not get to it. My hubby was not feeling well (could have had something to do with the heat) so we left Moab without seeing it.

overall opinion of Arches - of course Arches is beautiful, and I didn’t see everything to give a fair opinion - however - with the pictures I had seen of the park online - I was not surprised when I visited, other than the first drive into the park which was really cool. I would definitely change the time I spent - at least two nights is needed. There are lots of bike trails that looked really interesting. Although I am a dirt biker, I would opt for the mountain bike rides as there was a cool paved path for them. I seen an ATV tour depart and it looked super dusty having to follow a pack of ATV's like that. 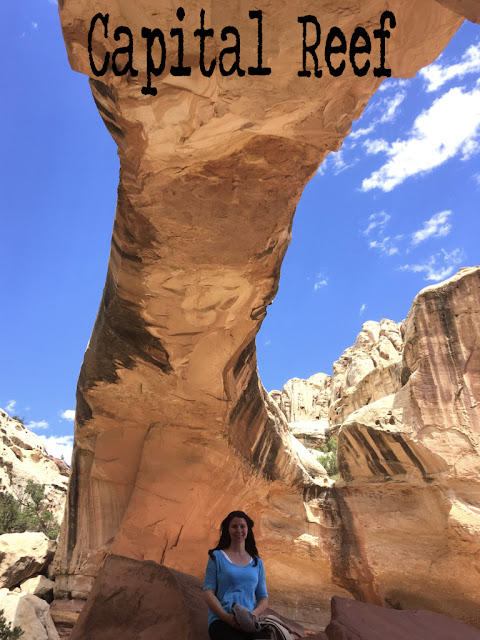 Capital Reef: (July 2) We drove from Moab to Bryce Canyon. Although we did not intentionally stop to visit Capital Reef National Park, we drove Highway 24 which drives through some of it. We actually thought we were on the Scenic Byway 12 - the drive was so beautiful. We were thinking, how could highway 12 be more beautiful than this! We stopped for a break at the Hickman Bridge Trail which is right off the highway. This was about 2 1/4 hours from Moab. It was 11 AM, and boy was it HOT! We made it to the bridge in 1/2 an hour - taking a few picture and water breaks. We rested under the bridge for quite a while as it was shady and relief from the sun. The restrooms here were nice and clean. A little further after Hickman Bridge, we stopped to look at some Petroglyphs. It was really neat to see orchards along this highway too.

overall opinion of Capital Reef - I would love to come back and explore more! There was a pullout along the highway just before the Hickman Bridge trail pullout called The Grand Wash. My hubby was excited to see Factory Butte along the way too (natures dirt bike area). 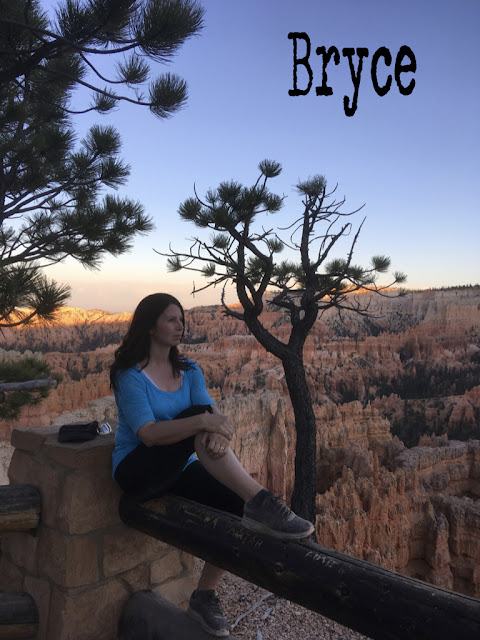 Bryce: (July 2) We arrived in Bryce around 3:00. (Left hotel in Moab around 8:30ish). We took our time driving as Highway 24 and 12 are amazing! We stopped for one hike and stopped at quite a few lookouts. Hogsback is an interesting part of the highway that freaked me out. It felt like Angel’s Landing for my car. We stayed at Best Western Ruby’s Inn. I was amazed at the size of this “Inn”, and was impressed how organized the check-in and check-out was. It was very touristy, but that made it neat too. We didn’t want to go to the National Park until around 7:00 so it would be cooler. We went to Sunrise Point. I had read all sorts of opinions about how to do the Queen’s/Navajo trail loops. At one point I was thinking to start from Sunset to Sunrise, but later decided to do Sunrise to Sunset as the park suggests. I liked this route. Going up the switchbacks to Sunset Point was an amazing finale to the hike. At 7:00 we were in the shade, although it was sunny out. We looked down into the ampitheatre, and my hubby said - “that’s nice - but I’m not going down there.” I said, “oh yes you are!!!” He was glad that I convinced him. Words cannot adequately describe this trail. Pictures cannot adequately capture its beauty. We started the hike from Sunrise Point at 7:15 and ended at Sunset Point at 8:30. We were taking it easy with lots of stopping to take it all in. I was worried about the trail being too hard. I am not exactly a spring chicken. I heard the elevations make it even more tough. When I told my daughter about the trail we were going to hike she said- good luck with that - I am guessing she was insinuating that I was not fit enough. The switchbacks going up the Sunset Point are a little steep, BUT, I do trails in British Columbia that are harder than this. I found it rather easy. Being in the shade and the cooler part of the day probably helped. We stuck around for the sunset and also stayed until really dark to see the stars in the night sky.

overall opinion of Bryce - I was blown away. I sort of knew what to expect from the pictures, but being there in person is another thing. Every step we took, we were amazed. What to change? There were some great looking paved mountain bike trails that looked attractive to me as I am very strong in my pedalling stamina. Would stay at least two nights to get more hikes in. The rim trail from Sunset Point to Bryce Point would have been nice to walk. I was glad to visit in the evening when it was cooler. 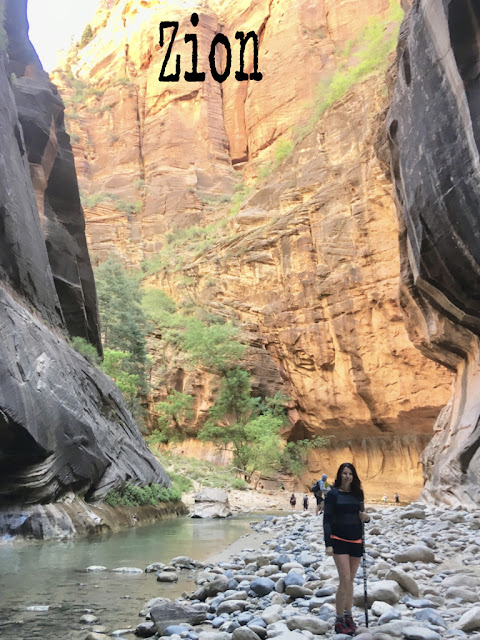 Zion: (July 3/4) We arrived in Zion around 11 AM, which took just under 2 hours from Bryce. With this stretch of the highway we drove through Red Canyon which has two arches you drive through. When we got to Zion National Park, the entrance took my breath away. Never have I seen such amazing beauty. As we drove further, the scenery did not stop. How many times can a person say “wow!” I bet that word has been said more here than anywhere else, surely out of my mouth anyway. Driving through the Mt. Carmel tunnel, then winding down that mountain is a drive I will never forget. For more information about Zion click HERE. 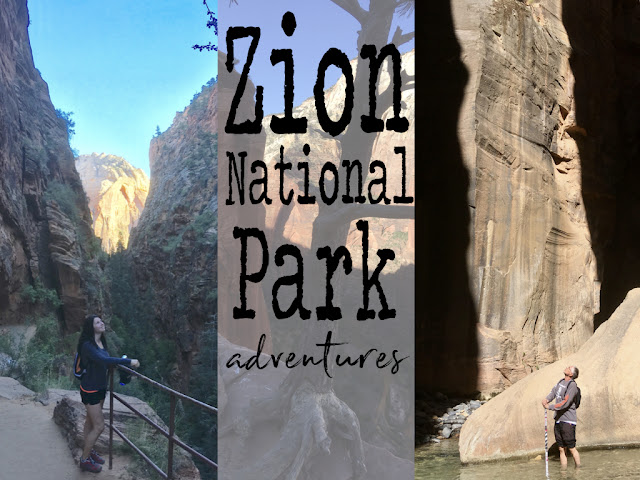 overall opinion of Zion - Never have I seen such amazing beauty. Evening hikes or first thing in the morning a must. Even taking the 6:30 shuttle it was overfull by the second stop.

My first thought when I got back home was - when can I go back? I want to do some more exploring before I am not physically able to. What a great place to go!

Posted by Sue@creativetryals.blogspot.com at 11:47 AM