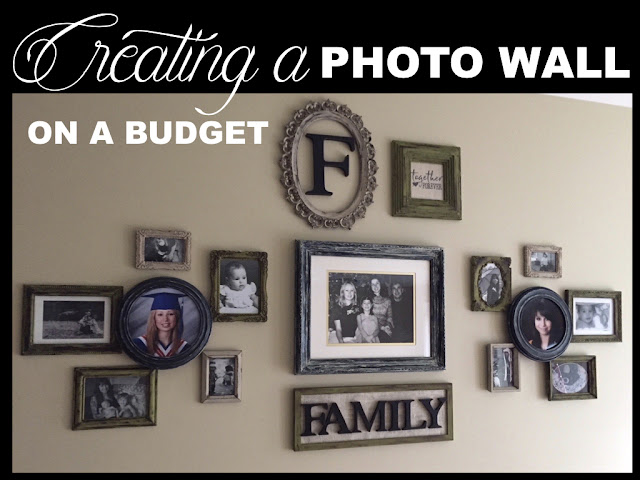 Hello! Welcome to my blog! This project has been on my mind for years - and this summer I found some time to do it. Some reasons it was hard to get started: 1. Out of the tons of pictures I have, which ones should I use? 2. What should the layout be?
3. What frames should I buy?

This photo wall cost me less than $12. It is not that I did not have money to spend, just why spend more money I you have to? I moved into my house ten years ago and never unpacked my framed pictures. I decided I would use the frames I had and use them. The twelve dollars was the fonts (purchased at garage sales) a mirror from the second hand store (which is the frame around the F)  the large frame and the square frame. All were purchased not really knowing I would be using it for this wall - I just liked the items so I bought them. The one I intentionally bought for this wall was a plate frame that cost $2 at a second hand store - I painted it to match. 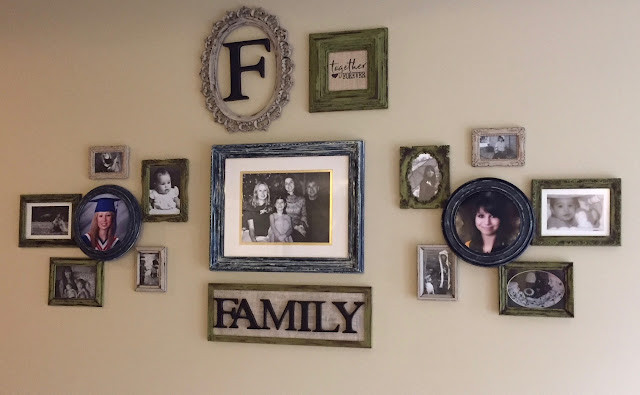 Now for my questions that seemed to put this project on hold for so long:
1. What pictures do I use? - do I put grandma on the wall? What about Aunt Jane? I don't want to leave anyone out right? I decided it would be a photo wall of our immediate family.
2. What should the layout be? - I looked and looked on Pinterest. I had a ton of ideas pinned. I finally decided that the layout would be determined from the frames that I had. 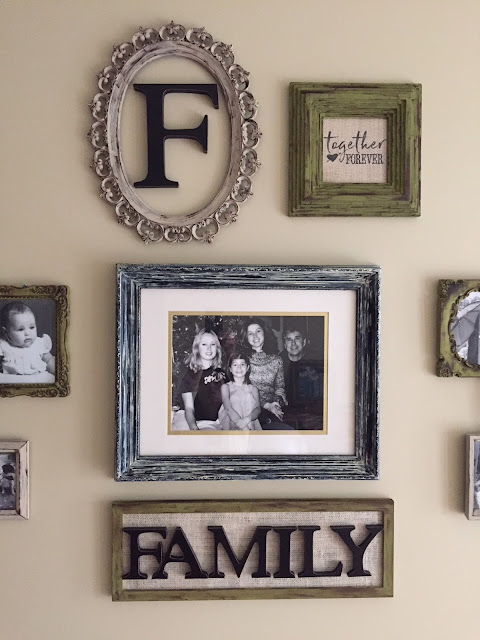 Laying things out on the floor, I started with the biggest frame I had, having no idea what picture would be inside it. I added other frames that kind of made a nice centre arrangement. Then I thought I could do a collage on either side of the centre arrangement - still not really knowing what pictures would go in the frames. Then the ideas of pictures started to come. My ideas were "We have two girls - their grad photos could go in the centre of the two collages and pictures of their lives surrounding that (baby, family, their dogs, their children) and a family picture in the centre." 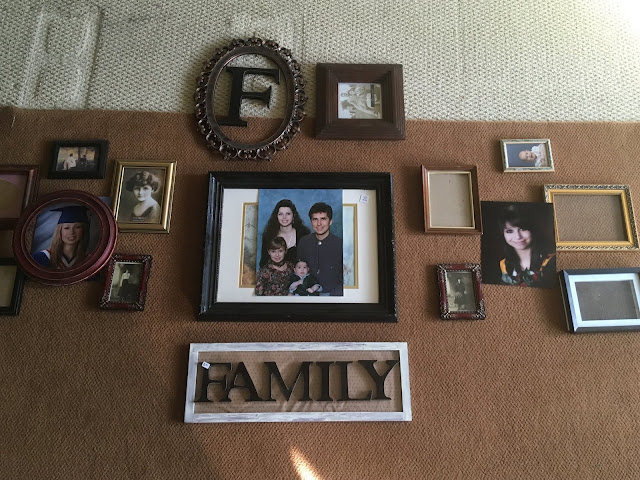 3. What frames should I buy? - I really only needed to buy one more frame to match the other side of the collage. I had a ton of frames so I did not need to buy more. They were all mis-matchy though so I went to work painting them. (I will post about the frame painting soon). Then another dilemma came up - what colour do I paint them?
It might sound crazy - but I chose my colours from the amount of paint I had. I had a lot of olive green, and light beige. Of course I had those paints because they matched the style and decor of my house. I had purchased the paint from Michael's when they were on sale for $1. I mixed a bit of plaster of paris in the paint so it would stick to the frames as some of them were cheap dollar store frames. Adding plaster of paris in acrylic paint makes it a chalk paint. Then another dilemma I had was  - what frames should be green?what frames should be beige? I decided the 5x7 frames from the collage would be green and two frames from the centre piece (since I had more of that paint) and the 4x6 frames from the collage and one from the centre piece would be beige. The big frame would remain black to tie in the letters and the round frames I would paint black. I love how the frames turned out: 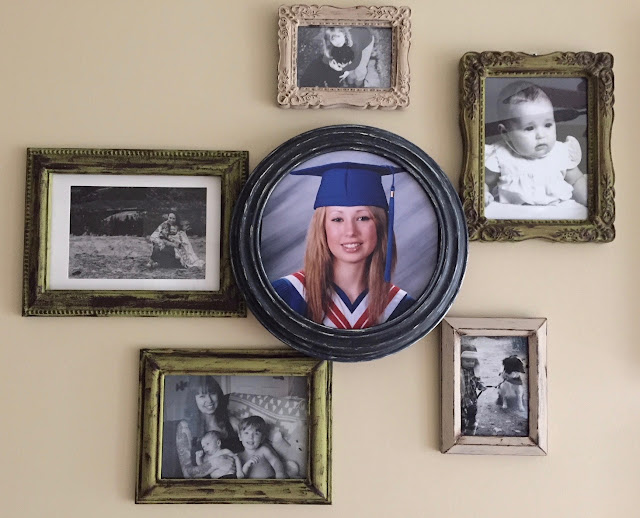 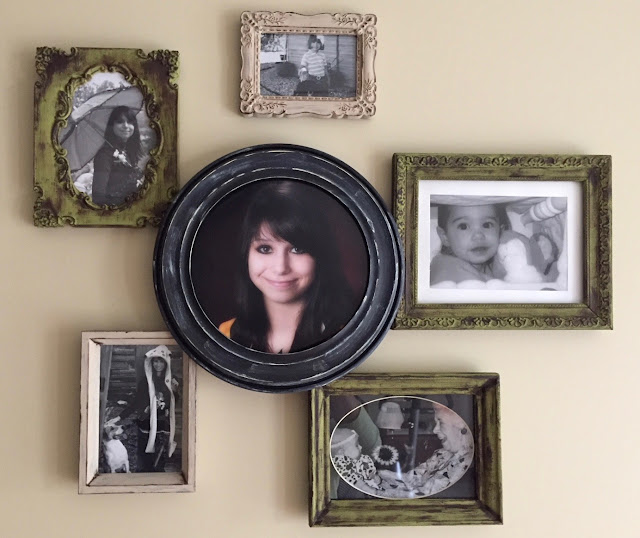 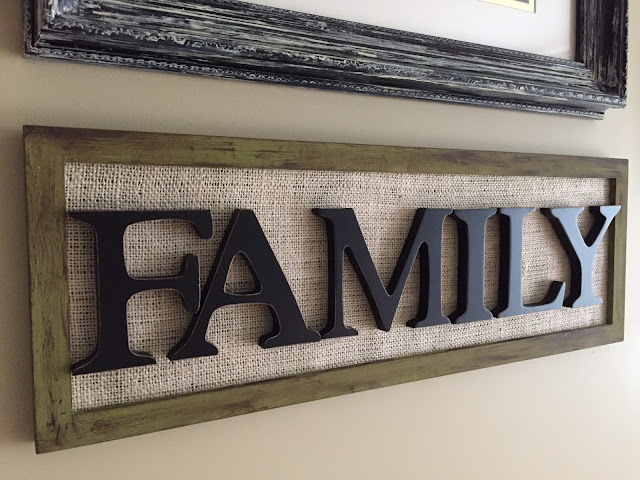 With the "family" frame I mod podged burlap on poster board to make it stiff. I hot glued the letters on. The glass is still in the frame I just put it behind the burlap, just in case I want to change this up one day. I purchased these letters at a garage sale for $1 a while back. I wasn't sure what I was going to do with them - but they just happened to fit perfectly into this frame and so on the photo well they went. 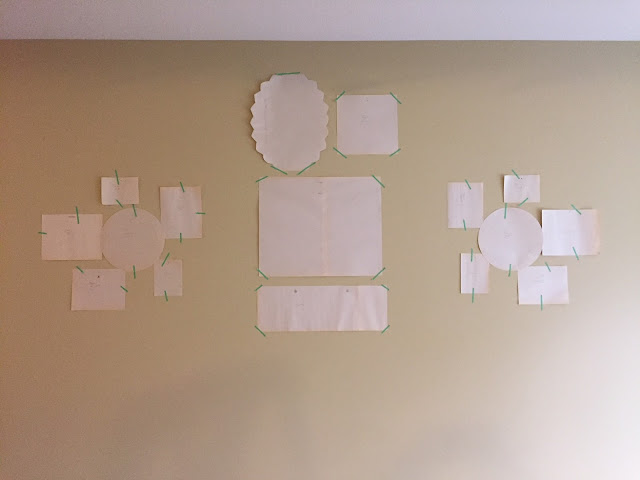 I loved this tip before putting the pictures up. I traced all the frames on to paper and did a mock set up on the wall. This was extremely helpful. I rearranged the pictures after I took this picture. I noticed the collages were further away than I wanted them to be from the centrepiece.

It feels so good to have this completed. The awesome thing was my husband was excited to help me hang this up because it looked so good! Usually he cringes when it comes to putting a nail in our walls. He is going to build me a console table to go under this so stay tuned!

Thanks for stopping by!

Posted by Sue@creativetryals.blogspot.com at 5:59 PM