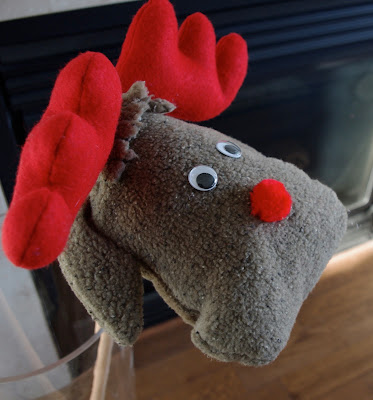 I started making this hobby horse a few years ago. I had the head and the antlers sewn - but it never got finished. I have no idea who I was making this for, but I decided it was time to finish it. I learned a lot about how to make a hobby horse properly by watching a few Youtube videos. There is a whole video series on how to make a beautiful hobby horse on Youtube, so if you are going to make one, I suggest you check that out. This post is for ideas only. I won't attempt to tell you how to make it, as I was already half finished a few years ago. I don't have the pattern anymore for the antlers or the head or the ears, but I did just hand draw them. I used googly eyes for the eyes and I sewed on a pom pom for a nose. I did not sew on a mouth as I thought my sewing techniques would ruin it. I was going to sew jingle bells on the antlers, but the recipient of the reindeer is only three, and he has a little brother so I decided not to for safety reasons. I think the little boy who got this was scared of it at first (either that or confused as to what it was), but I have heard that he has warmed up to it now. 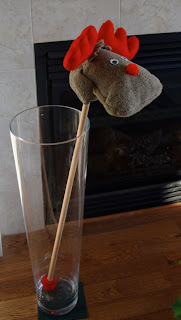 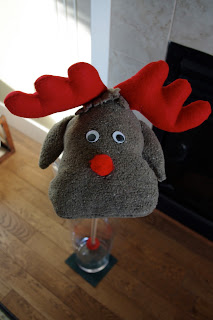 Posted by Sue@creativetryals.blogspot.com at 7:52 AM