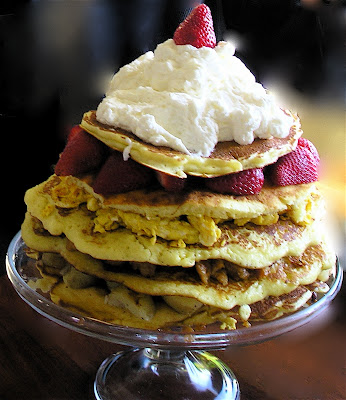 I found this idea on the web last year and I knew I had to make it for Father's Day. Wouldn't you know it - I cannot find it to give credit to the brilliant creator of this. I have got to say that this was a BIG hit. My "man cake" was not as beautiful as the one I saw - but I think it took on itself its own unique personality and looked impressive nonetheless. My daughter and I could not stop laughing as we assembled it. It made us utterly giddy putting this thing together - good times, GOOD TIMES!
Then of course the serving of the "man cake" was a blast too. My hubbies eyes just about popped out of his head. He LOVED it !!!(see pic below) 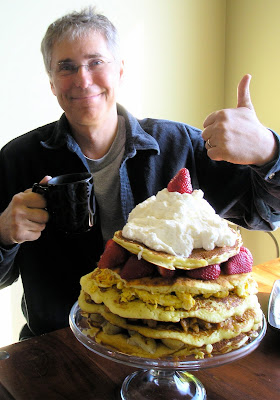 He gave it a thumbs up!
This impressive mountain of a breakfast was pretty simple to make. The man cake that I got this idea from showed that they actually cut it like a cake. We didn't even attempt that on this one - it was too massive. We took pictures and then took it apart. My husband was able to eat the leftovers from this for a few days. The man cake is just layers of different breakfast ingredients. 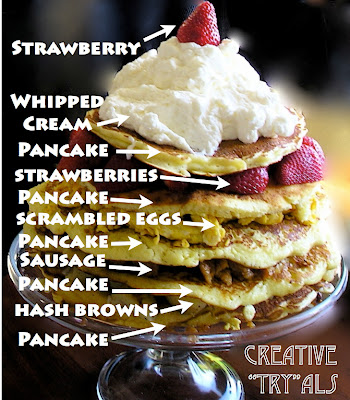 The bottom three pancakes were the size of my large cast iron frying pan. The fourth and third pancakes I made smaller. You can use bacon instead of sausage ( that is what it had in the original one ).  I sliced the strawberries in half.
Tips: I have had some inquiries about the Man Cake, and have added the following suggestions:

When each item was cooked I put it in the oven to keep it warm. I was totally flying by the seat of my pants while making this, so if I do it again, this is what I would do to be better prepared....
1. Before I cook anything - do all the prep of stuff that doesn't need to be cooked because I learned I didn't have time to do it while things were cooking.  A couple examples - get the cake stand out, whip the cream, wash and cut strawberries, plates or pots to put food in to warm in the oven.
2. Prepare all the food for cooking - pancake batter, scramble eggs, layout bacon or sausage, etc.
3. I cooked the pancakes in three different sized pans. I basically spread the batter to cover the circumference of the pans to get the round shape. If you don't have different sized pans you could cook large pancakes and cut to the desired size.
If you are doing this prepare a bowl before hand to be your template for the circle. The huge pancakes are hard to flip so be careful - I wrecked my first one. I realized I didn't cook it long enough. FYI - I made two batches of pancake batter. My recipe makes quite a few pancakes - so you will need at least two batches if not more, depending on the recipe you use.
4. Cook the eggs last.
5. After everything is cooked, set up an assembly line of ingredients. If you have helpers set up a game plan of who is doing what before you start. You want to assemble as quick as possible so the food is still warm.
6. Make sure Dad knows he needs to come to breakfast/brunch at a certain time. We had a hard time finding dad last year. Basically when it is put together, you want to eat right away as it will have already cooled a bit with the assembly.
7. Give yourself plenty of prep time. I thought I could do this in 30 minutes but it took more like an hour.
This was a lot fun to make and the results were fabulous.